Show me the money! Incentivizing Recruits for Focus Groups 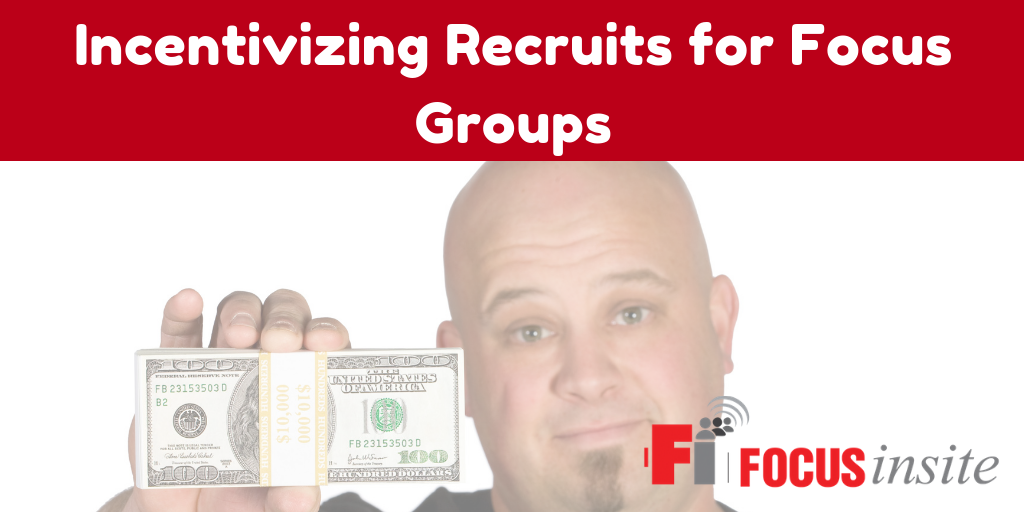 Ask any Qualitative Market Researcher or Professional Recruiter about issues with recruits not showing
up for a focus group they agreed to attend, and you’ll likely be bombarded with stories of no-shows,
late-comers, and ruined focus groups because of lack of attendance. If you think about it, the burden of
attending a focus group falls on the individual participants, not the person or company hosting the focus
group. Many focus groups are at least two-hours long, require a bit of coordination to attend (child-care,
travel, time out of the day, etc.), and require participants to sit in a room with a bunch of strangers and
talk openly about the subject/topic being researched. It’s a wonder anyone shows up at all. So how do
researchers and recruiters get individuals to show up? Incentives.
Incentives are not rewards, nor are they honorariums or salaries. Rather they serve
as a stimulus to attend the focus group, with the primary function to incentivize participants to show up
for the scheduled focus group on time. Most recruiters will tell potential participants of the incentive
being offered—whether monetary or non-monetary—upfront, so they remain motivated to show up.
Incentives are also effective as a way to encourage participants to not schedule something else during
the time of the focus group. People lead busy lives and often receive a number of last-minute requests
for the same time period as the focus group. Offering incentives acts as a way to protect the promised
time slot from being preempted by other demands. Incentives also convey to the participants that the
focus group is important, and worth their time.

Monetary Incentives
The most common incentive offered is money. There are several advantages to monetary incentives: its
value is immediately understood and recognized; it is universal and easily distributed; and, it works! If
considering giving money, whether it is cash, check, or pre-loaded credit card, there are protocols to
consider. At the conclusion of the focus group you can hand each participant an envelope with the
money and ask them to sign a form saying they received payment with the date and particulars of the
focus group spelled out. Most participants prefer to be paid at the conclusion of the focus group, rather
than be told that they’ll receive a check in the mail in a few weeks. If payment will be paid out in this
manner, it is important to explain this upfront when recruiting, so the participant doesn’t have different
expectations.
When considering how much to offer, keep in mind that if you go too low you’ll risk insulting
participants, go too high and the costs of the overall project can become prohibitive. If you’re recruiting
elite categories for a focus group, you’ll likely have to pay more to make it worth their while. Engineers,
executives, physicians, attorneys and similar professional classes may require incentives that range
between $150-$500. Currently, the sweet spot for incentives for most focus groups is between $75-$125.
It should be noted that all participants within a study should be paid the same amount.
Non-Monetary Incentives
Monetary payments aren’t the only way to incentivize recruits. There are other non-monetary
incentives that work equally as well. Sometimes it’s as simple as providing a catered lunch, or childcare.
Gift cards, gifts of food, clothing, or household items, are all examples of non-monetary incentives.
When deciding which incentive might work best, consider the demographic of your audience you’re
recruiting and the subject matter to be explored in a focus group. Think of the incentive as symbolic.
There may be alternative symbols that are worthy substitutes to monetary incentives. Regardless of what type of incentive you offer, make sure it is communicated clearly upfront. At the end of the day,
you don’t want participants to be disappointed or feel misled.

Focus groups are only as good as the people who participate. Incentives are a tried-and-true way to get
recruits to show up.

Interested in learning more about recruiting for your next study? Request a proposal here.